Mukaa Children’s Home is located up in the hills not far from the Mombassa Highway.  Even the home itself is on the side of a hill so there are two levels so to speak when you are there.  When you pull into the home after passing a large boys secondary school, you see the office block, then the girls dorm. Follow the stone path and you will reach the Dining hall, kitchen, and library.  Up the stairs you will find the boys dorm, the assistant managers house and the managers house along with guest housing.

The soil is red and the flowering bushes and trees make home for these children absolutely beautiful!  If you get up with the children at sunrise on a clear morning and look south, you are able to see the snow-cap peaks of Mt. Kilimanjaro.  The chicken project at Mukaa supplies the children with an egg a day and the extra eggs are sold to the local community.  There are also a few dairy cows and a tilapia pond on campus as well. In 2013 a borehole was drilled to supply the home with water as well as the local community.  Mukaa is very invested in the community around them from the clinic, to the local church and primary school.  The way they see it, if the children of Mukaa Children’s Home are going to be successful the community around them must also be strengthened. 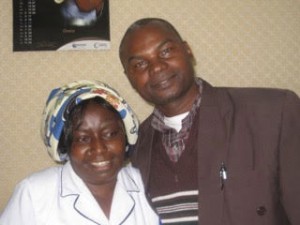 Armstrong has served in the Children Home network since 1990. Armstrong has a diploma in Biblical Studies & Christian Ministries from Scott Christian University. He also has earned a bachelor’s degree in Theology from Africa International University (AIU). He has further training in management, accounting, administration, HIV/AIDS counseling, and child evangelism. 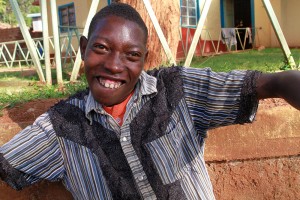 I feel so loved at Mukaa, even the visitors love me.  The police brought me to the home in 2009.  I had been dropped off alongside the Mombassa highway which runs from the Kenya Coast to Nairobi.  The story goes that a car stopped at small market and someone took me out of the car, set me down and then continued on their way.  After several hours, I was taken to the police station.  The police used the media and other investigative resources to locate the person who has abandoned me alongside the road.  I lived at the police station for a few days before they took me to Mukaa while their investigation continued.

At this point, I did not have a name, a tribal identity, a known date of birth or age.  Nothing was known about me except that I was physically and mentally disabled.  Upon arriving at Mukaa Children’s Home I not only received a name and estimated age of 10 years; but I was loved so much! I have slowly learned how to communicate, feed and bathe with supervision. I’m so thankful my family here at Mukaa is so patient with me. They hope that one day I will know how to write.  It is likely that I will spend the rest of my life at Mukaa and I’m very much okay with this (I know everyone else is too)!