One Day, Many Ways to Worship: WDP in Rockford, IL - World Day of Prayer USA

The Rockford Salvation Army hosted a celebration, adapting some of the excellent material contained in the 2013 materials. We combined the opening greetings from the French committee with salient paragraphs from the background materials.Each woman, wearing a colorful scarf around her neck, greeted celebrants and told a little bit about France. The last speaker welcomed the Stranger with a bright red scarf, passing it from her neck to the Stranger’s . We incorporated the Scripture reading through a play featuring a woman who anticipated a visit from Jesus but was instead visited by three needy persons. The woman gave away with compassion all the gifts she had been saving for her celestial Visitor. When in her prayers she questioned the Lord about his promise, she was reminded that Jesus had indeed come–in the guise of the needy persons who crossed her threshold. [Click here to download the script.] 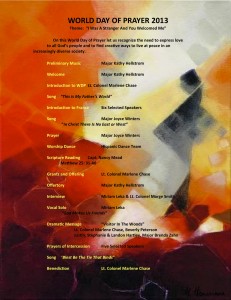 We used three of the listed songs, including “God Make Us Friends” which was sung as a solo by an immigrant woman from newly arrived from the Congo. She is French speaking and sang a verse in her own language. She was also the object of an interview on her experiences coming to this country. She and her children had to escape tribal fighting and told the audience how Christian people in the US gave them sanctuary and helped their difficult entry. The Prayers of Intercession outlined in the materials made a fitting climax to the interview. We put each of the program elements on an 8 x 11 cardstock piece with the beautiful drawing by the French artist as background. Songs and readings were printed on the back, so that all was contained in one very readable piece. The excellent children’s material gave us the means for our table decorations, which were cardboard Eiffel Towers patterned in the materials and placed on royal blue cloths with a single red rose next to the 10-inch high towers. Chicken salad croissants and several varieties of gateaux (cake) served as refreshments following the service. In the chapel where the service was held, a five-foot replica of the Eiffel Tower (same pattern enlarged) was placed near the altar which held a bouquet of wild flowers and a Bible opened to the Matthew scripture. We included a few additional elements, such as a worship dance by members of our church’s Hispanic ministry. This accorded well with the theme of welcoming the Stranger in our midst. About sixty women attended, and this was good for us. An ad run in the local paper generated at least two women who had never attended before. An offering was taken following a presentation outlining how WDPUSA uses the gifts given.