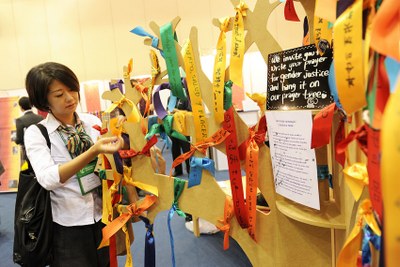 The World Council of Churches (WCC) has devoted 60 years of active commitment to gender justice. The WCC  10th Assembly being held in Busan, Republic of Korea is continuing the campaign for advocacy for gender justice. The WCC, in partnership with Korean women, has designed an encounter space –Umulga SHe-Space in the Madang exhibition hall at the WCC assembly.

Umulga, a Korean word, means “the well”- a place where the essential can be found. The Umulga SHe-Space is an inclusive space for women and men (She and He) to exchange, rest, pray and reflect either individually or in groups on issues related to gender justice.

The space is designed in the style of Korean hospitality and reflects the various places that are part of the lives of women and men in community. There is a booth representing a market-place with various craft and cloth items for sale, designed by women in Korea. There is a courtyard style meeting space, a tea stand, couch benches to rest and relax and a quiet room to pray. On Thursday, several women and men were in conversation and relaxing in The Umulga SHe-Space.

An important feature of the Umulga SHe-Space is a prayer tree at the entrance of the space, representing traditional Zelkova trees at the entrance of Korean villages. Visitors to this space are invited to write their prayers on coloured ribbons. Their prayers are for gender justice and a world free of violence against women and girls. These ribbons hang as blossoms on the prayer tree.

Dr Fulata Mbano-Moyo, WCC programme executive for Women in Church and Society, spoke about the idea behind the space. She said that Umulga SHe-Space is a way “to make sure that the assembly promotes gender justice and encourages participants to include gender justice in their agenda for dialogue and perspectives shared at the assembly.”

What do men think?

Gleeson Vernon Jobis an active participant of the Umulga SHe-Space. So what does he think of the space? He sees the encounter space as an important multicultural approach to the journey of women and men for gender justice. He added “This is a personal journey for me. I decided at a young age that I don’t want to be a perpetrator of violence, and I will stand against violence against women. As a man, I believe gender equality is a step in the right direction. Women should not be seen as lesser.” He said men must be encouraged to become active in building a just community of women and men in a genuine way.

Badges promoting the “Thursdays in Black” campaign were also available at the space. Assembly participants were actively supporting the campaign on Thursday by wearing black and the badges. The campaign was started by the WCC in the 1980’s as a form of peaceful protest against rape and violence – especially taking place during wars and conflicts. WCC supports zero tolerance of violence against women.

A series of dialogues will take place at the Umulga SHe-Space during the assembly. There will also be discussions held at the assembly on issues of gender titled “Community of women and men in the church: mutual recognition and transformative justice”.

*J. Ayana McCalman is a lawyer and missionary for the Council for World Mission (CWM). She works for the United Congregational Church of Southern Africa as communications and justice advocacy officer.